In 2011 and 2012, AIR in partnership with the Stephen Lewis Foundation supported a technical support and solidarity initiative with Panzi Hospital in Bukavu, eastern Democratic Republic of Congo focused on the mental and emotional health needs of Panzi staff. Panzi Hospital is known worldwide for its brave and pioneering services and advocacy around sexual violence and innovations in gynaecological surgery and fistula repair. However the hospital’s own staff conduct this work in a context of constant security threats and stress from past and on-going conflict in the region. Panzi Hospital’s leadership acknowledged the need to find ways to address the mental health concerns of the people that make Panzi’s incredible work a reality. The intervention was led by AIR Steering Committee member Isis-Wicce, a Kampala-based women’s rights organisation that has built a method of holistic response for women in conflict-affected contexts. The Isis-Wicce team began with a psychological needs assessment of Panzi staff accompanied by introductory training on understanding mental health, and rapid counselling for staff. The team was led by Dr. Eugene Kinyanda (Consultant Psychiatrist) with Ruth Ochieng ( Executive Director Isis-WICCE), Henry Oboke (Consultant Clinical Psychologist) and Rosebell Kagumire (Communication Consultant). The assessment pointed to the realities of serving as a professional in an active conflict zone. A quarter of Panzi’s staff completed the survey, which showed that 55.8% had experienced various forms of torture and violence committed against themselves or their close relatives, while 25.3% reported at least one form of sexual torture. Staff also experienced secondary traumatisation while providing care and services for patients affected by extreme violence.  Isis-Wicce used these findings to design a follow-up therapeutic residency in June 2012. The residency team included two counselling psychologists, Monica Gitonga and Susan Wachira who provided group and one-on-one counselling and led a Training of Trainers workshops on leading group therapy sessions with follow-up to establish group counselling within the hospital on an on-going basis. Sessions were run in Kiswahili and English. At the end of the intervention a staff member commented:

“I was getting overwhelmed with work when I saw the agony of women who had been gang raped. But after sharing in the group therapy the positive things about the work we do and the staff retreat which I participated in, I feel so relieved and empowered. In fact I have started helping a colleague who has been exhibiting PTSD [Post-Traumatic Stress Disorder] symptoms. She is now able to understand herself and the symptoms she has been experiencing. I am also very grateful to our director Dr. Mukwege and VVS project bosses for their courage and support in getting us psychologists to help us be stronger and better caregivers”. 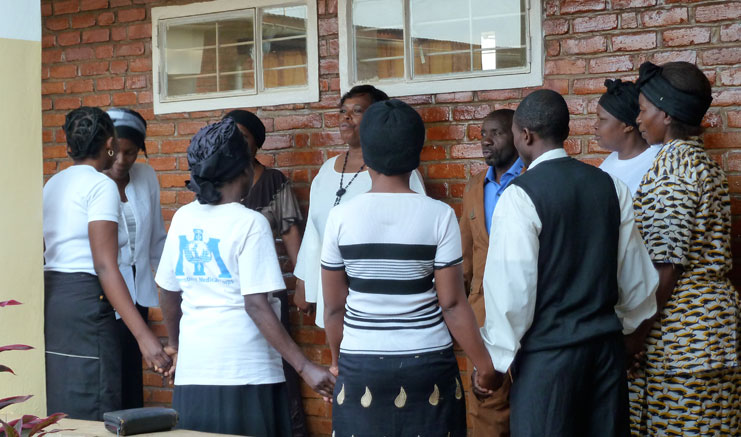