Working on the frontlines of violence against women and girls, HIV/AIDS and mental/emotional health requires a sharp mind, quick feet, and an openness to finding creative ways to respond even when resources are constrained.  Activists and service providers hold a tremendous amount of practical knowledge and technical expertise on how best to intervene to both prevent and respond to these interrelated issues in ways that are adapted to the social, economic and infrastructural realities where they are.  Documenting this practice however can seem like a luxury that time cannot afford.  Most activist initiatives in the African region operate with tight budgets and resultant constraints in human resources.

As part of its Generate and Build programme, AIR in partnership with the Stephen Lewis Foundation supported five organisations to document models used in their current practice to address issues of HIV and AIDS, violence, health, well-being, community transformation and human rights and social justice.

From 15-17 May 2012, AIR hosted the first Documentation Roundtable to review its pilot documentation round.  Representatives from the five organizations – (South Africa), Raising Voices (Uganda), Rwanda Women’s Network (Rwanda), Urgent Action Fund-Africa (Kenya) and Isis-Wicce (Uganda), presented narratives, visuals, films and digital stories, and engaged in broader discussion around methodologies and experiences with documentation.  The group also generated a set of lessons that are being developed into guidelines for further documentation programming.

“It’s important we begin a conversation which works from exciting theories and models, thinking through them critically as to why they may not work in some contexts. We can’t just stop at thinking it doesn’t work because it is western- we need to dig deeper and find from it what does work and work from there.  There are complexities within different environments even amongst the same country- we can build new theory, which can also be complex and critiqued”

All materials produced in the first documentation initiative are available in the Resources section. 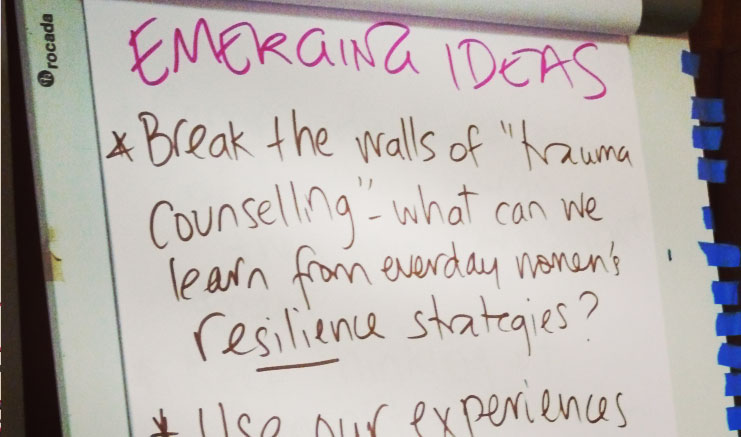